World Peace Game is a creation of John Hunter from Virginia, USA, an award-winning gifted teacher and educational consultant who has dedicated his life to helping children realize their full potential. In April 2018, in the first game in Singapore, 31children tried to solve world problems (and they did!) in an intensive five-day holiday camp.

World Peace Game is a hands-on political simulation that gives players the opportunity to explore the connectedness of the global community through the lens of the economic, social, and environmental crises and the imminent threat of war. The goal of the game is to extricate each country from dangerous circumstances and achieve global prosperity with the least amount of military intervention. As “nation teams,” students will gain greater understanding of the critical impact of information and how it is used.

In World Peace Game, it is important that teachers and adults respect children’s ability to work independently to achieve their goals. In the playing time of 15+ hours, children freely work on their own, have plenty of time to try and make mistakes, learn from their mistakes and try something new, using their creativity and problem-solving skills, without being bound by any stereotypes or pre-set concepts.

Through teacher training, World Peace Game Foundation has been certifying educators from around the globe to use the Game in their classrooms. The Game has now been played by children all over the world . It uses a four-tiered structure that puts the problems of the world within the reach of the students. Students are organized into country teams with Prime Ministersand Cabinet staff. Other important roles in the Game include the Secretary General of the United Nations, President of the World Bank, Arms Dealers, Weather Goddess, and the Saboteur. This game exposes children to, critical thinking, creative problem-solving, leadership responsibilities, decision making, negotiation skills, and much more.

Throughout World Peace Game, children will;

Throughout World Peace Game, children will;

Are You a Program Coordinator? 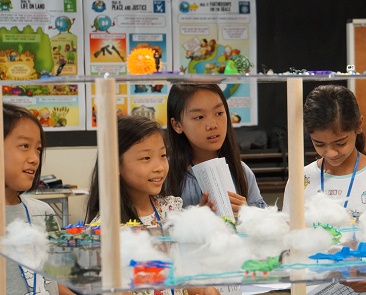 We provide workshops, CCA (co-curricular activities), and holiday camps for the children in Singapore. Ignite children’s curiosity for shaping a better world through our special programs!

We provide workshops, CCA (co-curricular activities), and holiday camps for the children in Singapore. Ignite children’s curiosity for shaping a better world through our special programs!

SITE MAP
About Us  |  Our Program
Schedule  |  Contact Us